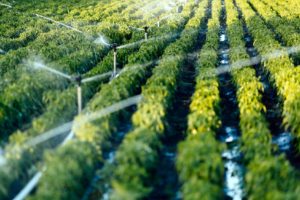 The project constructs a linear model of the agricultural and livestock sectors using water as a primary input. The model covers roughly 80% of all water used by the sectors. The objective is to minimize water consumption without compromising aggregate farmer revenues or food security (measured in terms of total tons of all crops produced). The model evaluates potential water savings under seven different scenarios. The scenarios differ based on the amount by which crop production can increase or decrease, as well as the fodder to livestock ratio. The upper and lower production bounds are meant to reflect political clout: the higher the allowable decrease in production less the political clout a producer is presumed to have (and vice versa).

The paper also estimates reductions in energy use and the portfolio of crops produced under each of the scenarios. Preliminary conclusions suggest that while there are a variety of ways to reduce water use without compromising food security or farmer revenues, meeting Saudi Arabia’s goal of reducing water consumption by 30% is only achievable with either a large allowance for changes in the types of crops produced, and/or a significant reduction in the fodder to livestock ratio, such that fodder used as feed for domestic livestock is imported. The conclusions also show that reducing water consumption by 30% would save roughly 2.05 million BOE; and if the water saved was used to displace all or part of the desalinated water produced in the country, up to 30 million BOE of energy could be saved. In each instance, the portfolio of crops produced domestically remains diverse. The political considerations will be estimated using KTAB, and are yet to be developed.

Policy Options for Reducing Water for Agriculture in Saudi Arabia

As populations and economies grow, a megatrend that will increasingly affect both developed and emerging…

As economies in the Middle East and Asia grow and develop, there will be further…

Energy for Water in Agriculture: A Partial Factor Productivity Analysis

Water, energy and food are inextricably linked and, consequently, inefficient use of any of the…

Policy Options for Reducing Water for Agriculture in Saudi Arabia