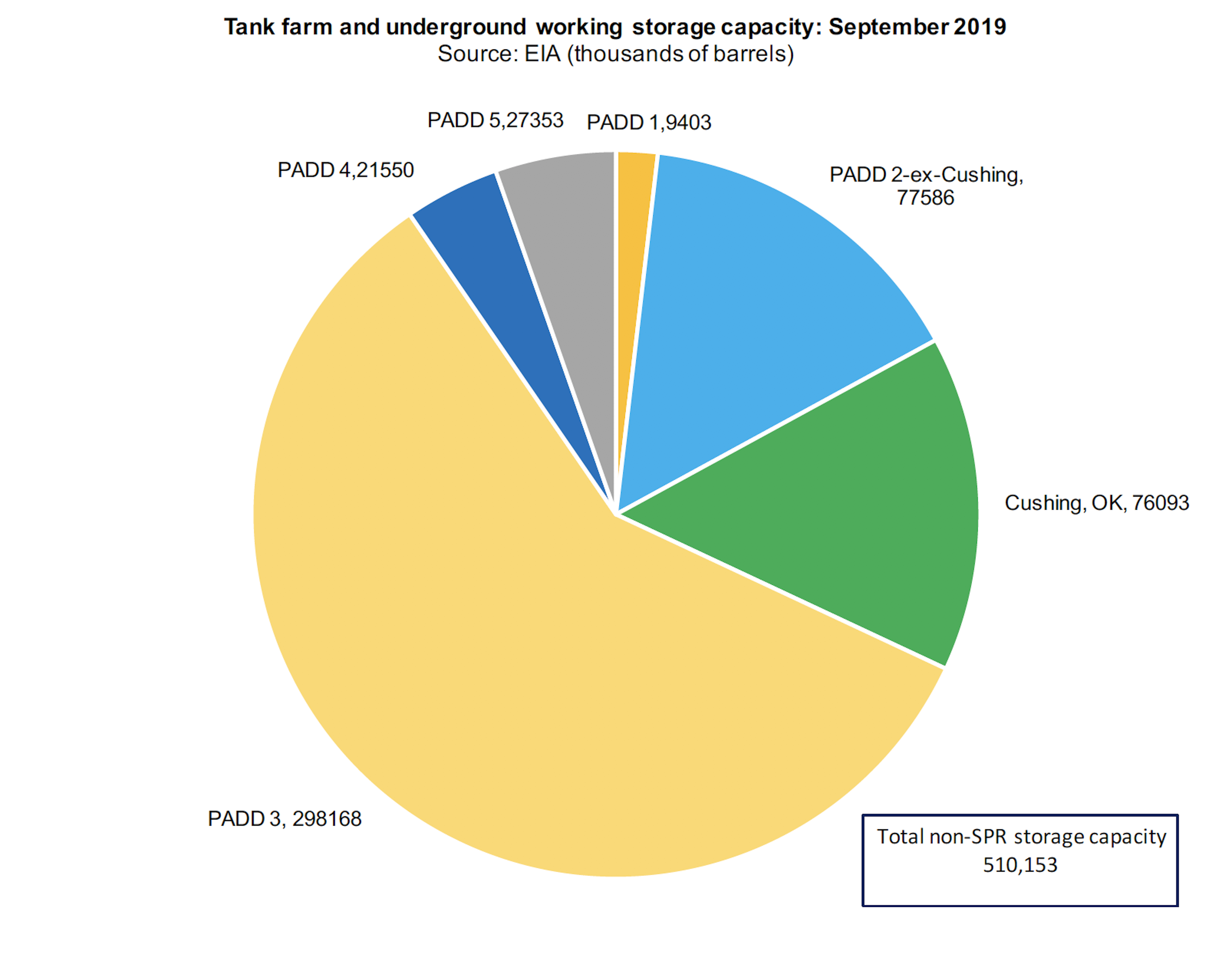 While it accounts for just 15% of total working storage, Cushing represents 100% of the storage capacity for NYMEX contract delivery (2). The dwindling availability of capacity (3) to store crude oil at Cushing (Figure 2) placed extraordinary pressure on the oil markets. This resulted in the first-ever negative settlement price for the NYMEX May 2020 delivery futures contract on April 20, 2020. The price rebounded into positive territory the following day, which was also the final trading day for the contract. 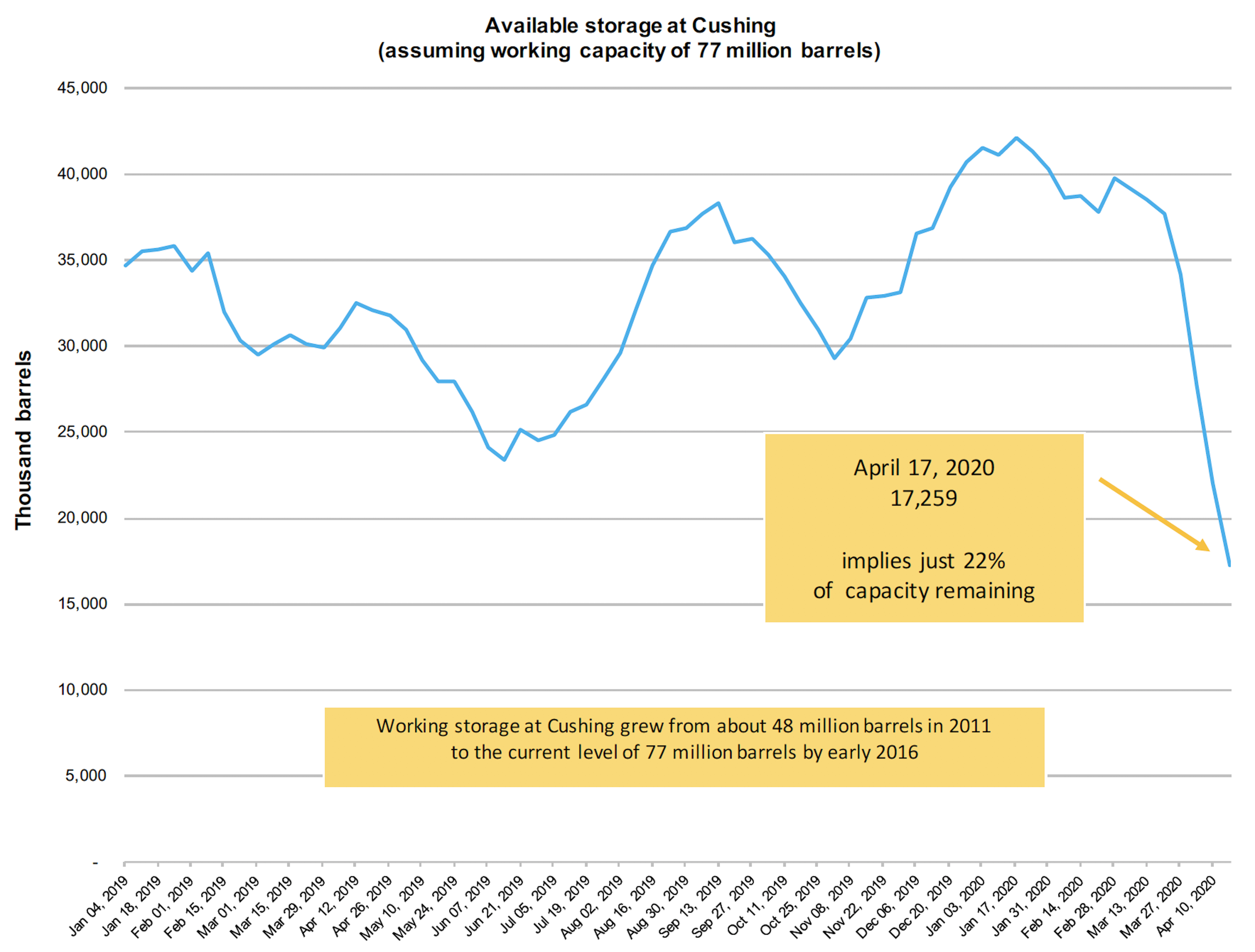 The NYMEX May 2020 contract was due to terminate trading on Tuesday, April 21, 2020. At the close of trading Friday, April 17, 2020, the settlement price was $18.27 per barrel, and the remaining open interest (4) was 108,593 contracts, representing 108,593,000 barrels to be delivered during May (each contract represents 1,000 barrels). The remaining available capacity at Cushing for the week ending April 17 was about 17,300,000 barrels. In other words, the contracts still open on Friday, with just two remaining trading days, exceeded the then available storage capacity by a factor of more than six.

The size of this difference, with just two days remaining to expiry, is quite unusual. For example, for the two previous NYMEX futures contracts, two days before trading expired, the March 2020 delivery contract open interest exceeded the then available storage at Cushing by a factor of 1.3, and the April 2020 contract by a factor of 1.7. In each of these cases, the remaining open contract volumes at trading expiry were well under the remaining available capacity at Cushing.

So, come Monday, April 20, 2020, the day before trading expiry, with 108,593 contracts open to start the day, something had to give. That something resulted in a steep price decline. A significant number of traders with long positions (5) did not want to take delivery of their oil in May. Because a long position carries with it the obligation to take delivery, the longs effectively ‘owned’ their May barrels unless they closed their contract positions. So, having nowhere to store them (or at least expecting there would be little or no available capacity at the time of delivery), they were willing to pay to dispose of the barrels, implying a negative price for ‘their’ oil.

To close a long futures position, a trader must take a counterbalancing short position. That is, they must sell a futures contract for the same delivery month as the oil that they are currently obligated to take ownership and delivery of. If no one wants that oil, i.e., no one is willing to pay a positive price for the contract that represents that oil, the holder of the long position (the owner of that oil) will be required to take delivery or pay someone to take the barrels, resulting in the negative price observed.

This is no different than what would happen in the physical market. When a producer brings oil to the surface, and there is no contractual obligation for someone else to take delivery of that oil, the producer still must do something with it. If they have no storage capacity available, and it remains illegal to simply dump it on the ground or down a river or stream, it must be taken away from the site, and that will incur a cost. If no one downstream wants that oil, there will be no revenue to compensate the producer for the transport cost, which means the producer has paid someone to take the oil and they ‘sell’ that oil at a negative price.

The negative price of the May 2020 WTI contract may also be seen to reflect the price the market was willing, on that day, to pay to leave a barrel of oil in the ground, i.e., the price for a barrel to not be produced and delivered, as opposed to the norm of having a barrel produced and delivered. Based on the open interest on Friday, April 17, there were at least 91 million barrels of oil that could not find a place in Cushing storage, even if it could have been delivered immediately, rather than in May. So, one may interpret from all of this that the market deemed it to be worth $37.63 per barrel to pay producers not to produce and deliver.

Is there a future for negative prices?

Can negative prices occur again? The answer is yes, and June 2020 delivery contracts could follow this pattern. At the termination of trading for the May 2020 contract there were 2,427 contracts open, representing 2,427,000 barrels to be delivered at Cushing during May. These volumes alone will take up some of the available storage capacity that could otherwise be carried forward to receive June deliveries. But additional volumes of crude oil, beyond those barrels represented in the futures market, are also delivered into storage at Cushing, while some currently stored volumes are shipped out (Figure 3). 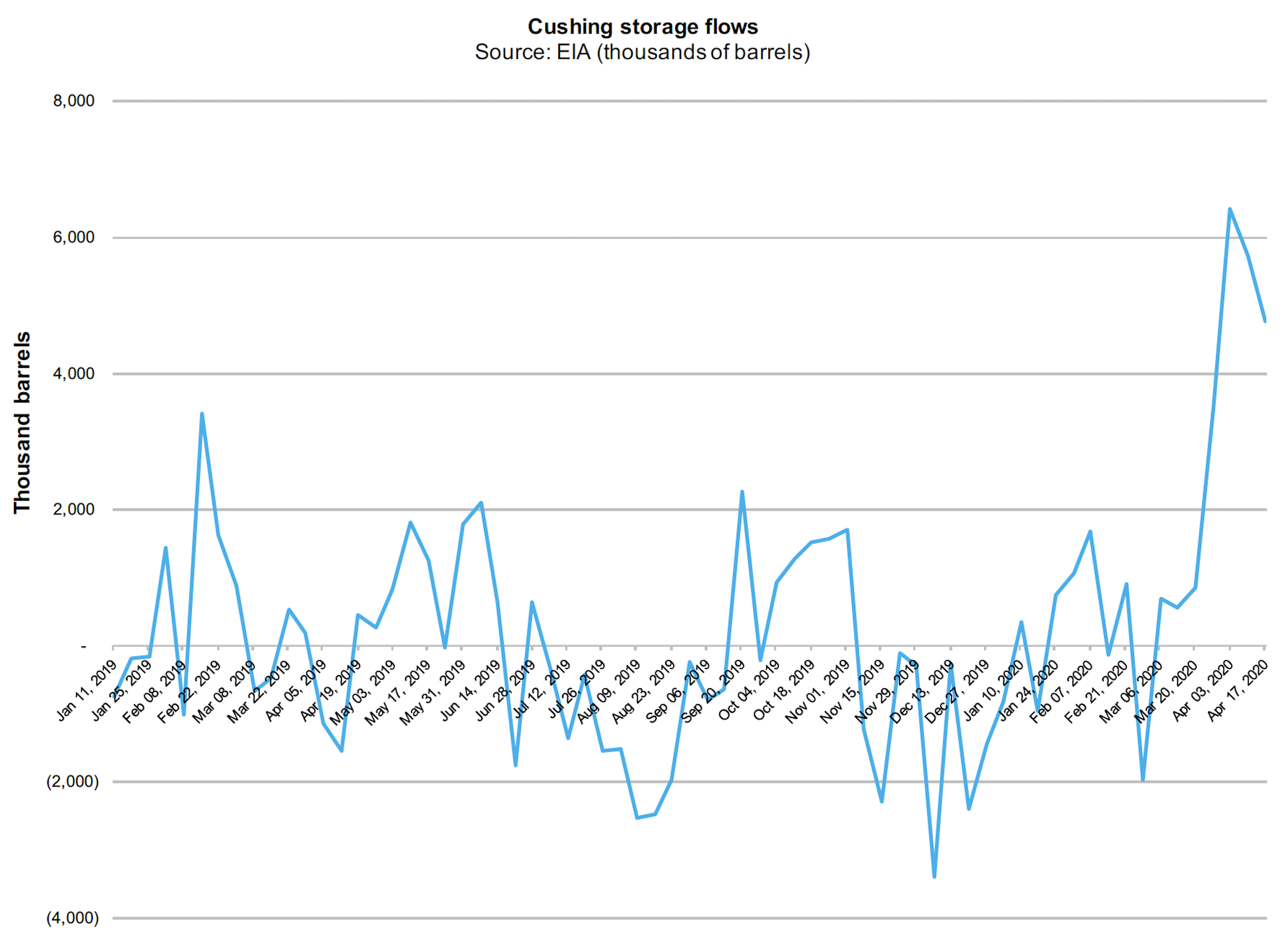 Since the OPEC+ meeting collapsed at the beginning of March, and the Saudi-Russia price war began to increase supply, on top of the COVID-19 demand shock, the average weekly increase in volumes stored at Cushing has amounted to 3.2 million barrels. For the most recent four weeks, the average increase was 5.1 million barrels. These represent positive net flows in and out of the Cushing storage facilities. On average, since early March, 3.2 million more barrels per week have flowed into storage than were shipped out. If this pattern holds for the last two weeks of April, an incremental 6.4 million barrels will flow into Cushing storage, leaving 10.9 million barrels of working capacity heading into May. And, if this average rate of incremental storage build continues, Cushing storage capacity will be full by the middle of the third week of May. If the most recent four-week average incremental increase is maintained, there will be no available capacity beyond the middle of the second week of May.

The most recent OPEC+ agreement to reduce production by 9.7 million barrels per day does not take effect until May 1. Therefore, it will not have any direct effect on the rate of inventory build at Cushing for the remainder of April. The real question, then, is whether or not the agreed May-forward reductions, plus the price-stimulated reductions from non-OPEC+ producers such as the U.S., will be sufficient to reverse the rising tide of crude oil stored at Cushing in time to avoid another negative price for June deliveries.

This will all depend on the balance of U.S.-based production and consumption over the next month as the global economy begins to slowly come back to life from the effects of the COVID-19 lockdowns.

3 Shrinking crude oil storage capacity is not unique to Cushing. Nearly all non-Strategic Petroleum Reserve capacity across the five Petroleum Administration for Defense Districts (PADDs) is at, or very near, five-year highs. The most recent week, ending April 17, 2020, saw a national increase in storage of 15 million barrels, and this occurred while net imports of crude oil fell. Net imports were down 37.5% for the same year-on-year four-week average. See https://www.eia.gov/petroleum/supply/weekly/pdf/wpsrall.pdf

4 Open interest is the term used to report how many contracts remain open at the end of the trading day. There is no set number of futures contracts for any delivery month, and contracts are opened and closed by traders coming into or leaving the market. Nevertheless, every contract always has both a buyer (long) and seller (short).

5 For the previous week, the producers, merchants, processors and users (PM) trader classification accounted for 21% of all outright long positions, while the managed money (MM) trader classification accounted for 12.5%. The PM traders will be expected to require storage capacity. Note that these shares are for the entire forward curve and are not specific to the May 2020 contract. This level of breakdown is not readily available outside the Commodity Futures Trading Commission (CFTC). Thirty-eight percent of the long positions were associated with calendar spread positions, which do not have the effect of placing either upward or downward pressure on price; these positions gain or lose value based on a change in the slope of the forward curve. Each of these shares is within a few percentage points of the average since 2006, so there does not appear to be any significant shifting in the roles of traders.

It is also not unusual for the majority of futures contracts to close before expiry, since futures contracts are employed primarily to mitigate market price risk, not to acquire or dispose of physical crude oil.

6 For the two previously expired NYMEX crude oil futures contracts, open interest on the penultimate trading day corresponded to a ‘cushion’ of 20 million barrels of available capacity at Cushing relative to the previous week’s levels.

Please fill in your details and we will endeavor to respond within 5 working days.

The workshop series “The Future of Mobility” provides a forum for discussing key sustainability issues in...

Please fill in your details and we will endeavor to respond within 5 working days.