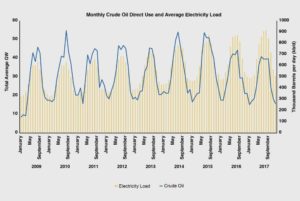 KAPSARC’s data reveals that in the last three years, crude burn volumes have fallen, partly due to the increasing use of natural gas in the power sector, improvements in the energy efficiency of air conditioners, and, moving forward, solar photovoltaic (PV) generation.

Buildings energy demand grew by 6.7% per year on average between 2010 and 2017, and this growth is attributed to rising average temperatures, low energy prices, rapid population growth, rising incomes, and more residential and commercial units to be cooled during the summer.

Additionally, residential users rank highest in the consumers’ electricity list, followed by commercial users and governmental offices. They are responsible for around 50%, (16%) and (11%), respectively.

Air conditioning accounts for around 60-70% of total household electricity consumption.

Recently, the Kingdom has taken several measures to promote sustainability in its electricity sector. In 2016 and 2018, Saudi Arabia introduced a range of reforms as part of Saudi Vision 2030 to modernize the economy and make it less reliant on oil revenues. These include raising domestic energy prices, prioritizing energy efficiency, and diversifying the country’s fuel mix.

This strategy is aligned with new trends in the energy sector, to increase renewable energy and limit the role of oil in electricity production. A new report confirmed that natural gas and renewables will rule America’s electricity future and said that as much as wind and solar are increasing, natural gas is increasing more. Furthermore, gas will continue to grow faster than all other energy sources in the United States for some time.

KAPSARC is a non-profit global institution dedicated to independent research into energy economics, policy, technology and the environment, across all types of energy. The Center is focused on finding solutions for the most effective and productive use of energy to enable economic and social progress nationally, regionally and globally. — SG