Sustainable growth in spotlight at T20 Summit in Tokyo Previous 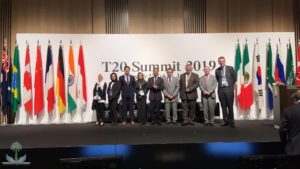 Representatives at the T20 Tokyo Summit delivered a final communique to the Japanese Foreign Minister Kono Taro on Monday, ahead of the June G-20 Summit in Osaka.

Taro thanked the think tanks involved in the Summit for providing their proposals on various issues, and for establishing 10 task forces under the theme “Seeking a Sustainable, Inclusive and Resilient Society” to assist the G-20.

“A sustainable, inclusive and resilient society is this year’s theme, but how to achieve it is a big question. I appreciate the discussion of this two-day T20 Summit on various issues including World Trade Organization (WTO) reform, innovation in small- and medium-sized enterprises (SME) and infrastructure,” he said.

Monday was the second and final day of the T20, and was occupied by panel discussions with participations from Japanese and foreign think tanks, researchers and experts discussing the 10 policy task forces related to the G-20’s main agendas.

The closing remarks were given by members of the T20’s troika, including Dr. Yoshino Nayuki, T20 Japan chair and dean of the Asian Development Bank Institute, Dr. Fahad Al-Turki, vice president of research at the King Abdullah Petroleum Studies and Research Center (KAPSARC) and head of the Saudi delegation, and the Argentine T20 Summit Chair Dr. Julia Pomares, who hosted last year’s event in Buenos Aires.

The host country has the privilege of selecting the task forces specifically for the T20, with the responsibility of aligning them with the priorities of the G-20. Of the 10 approved this year, two were continuations of task forces established in Argentina last year, and, as Saudi Arabia will be hosting the 2020 G-20 Riyadh Summit, Al-Turki spoke about the importance of the Kingdom’s participation in the discussions.

“I can assure everybody that the task forces and issues that will be discussed under the Saudi presidency, will be a continuation of the legacy of topics that have been discussed in Germany, Argentina and also in Japan,” he told delegates.

The reduction of widening inequality, poverty, gender inequality and climate change are some of the challenges addressed at the T20 Tokyo Summit, with new task forces presented under the Japanese presidency focusing on aging populations, economic impact of an imbalanced society, immigration and SME policy faced with development of financial technology.

The US-China trade crisis and WTO reform were also discussed. The policy recommendations developed by the T20 Japan Summit task forces will be considered ahead of the G20 Osaka Summit on June 28-29.

Imagine a world without OPEC