Investments in spare capacity provide value to the economy because deploying the production held in response to disruptions saves costs that result from price volatility. This value can be calculated by subtracting the gross domestic profit (GDP) losses that the world would expect to suffer even after deploying the spare capacity buffer from the expected losses without the buffer. The expected losses depend on the buffer size, the magnitude and persistence of the shocks, and on the global GDP losses incurred when there are production shortfalls.

For many years analysts have judged oil market stability by considering the level of excess production capacity maintained almost exclusively by OPEC. The production and delivery of oil to the market is subject to frequent disruptions, whether from conflicts, natural disasters, labor strikes, port closures, or political sanctions. In addition, demand can be affected by other factors such as the general state of the global economy. The rigidity of demand and supply magnifies the impact of any disruption, and restoring equilibrium to the market often requires sharp price movements, especially in the short term.

These sharp movements and the financial risk premium associated with volatility impose costs on the global economy if they are not dampened through mechanisms including the release of strategic stocks held by major oil importers, redirection of oil tankers to fill geographical imbalances, or increases in production from OPEC spare capacity. Historical examples where OPEC has used its spare capacity to stabilize the market include increasing members’ production to meet the unexpected buildup of global oil demand from 2003-2004, and to compensate for the collapse of Libya’s oil production following the uprising of 2011.

The study uses monthly data to build and estimate a model to analyze a ‘counterfactual’ scenario — comparing what would have been the outcome if OPEC had not deployed spare capacity to the actual outcome observed in global oil markets. The model describes how OPEC maintains a buffer of spare capacity that it uses to offset perceived shocks to global oil demand and supply. The analysis of OPEC’s behavior recognizes that the economic, industrial or geopolitical information necessary to accurately judge the size of such shocks is never fully available, which limits OPEC’s ability to stabilize the price of oil. In addition, the model accounts for OPEC’s logistical constraints and compliance levels.

The counterfactual scenario is based on estimates of the monthly oil prices that would have prevailed from 2005 to 2014 had OPEC not used its spare capacity to offset shocks. These hypothetical prices are compared to the prices historically observed. There is no consensus on how price responsive global demand is. The study examines the effects of a range of monthly price elasticity estimates. Figure 2, based on a monthly price elasticity of -1 percent, is representative of the type of impact that OPEC’s spare capacity policy has had. The analysis indicates that OPEC had a substantial stabilizing influence, perhaps reducing oil price volatility by as much as half. The same conclusion holds when the analysis only considers Saudi Arabia, or the four GCC members of OPEC collectively. Indeed, the analysis finds that Saudi Arabia has played a greater role in offsetting shocks than all other OPEC members combined. 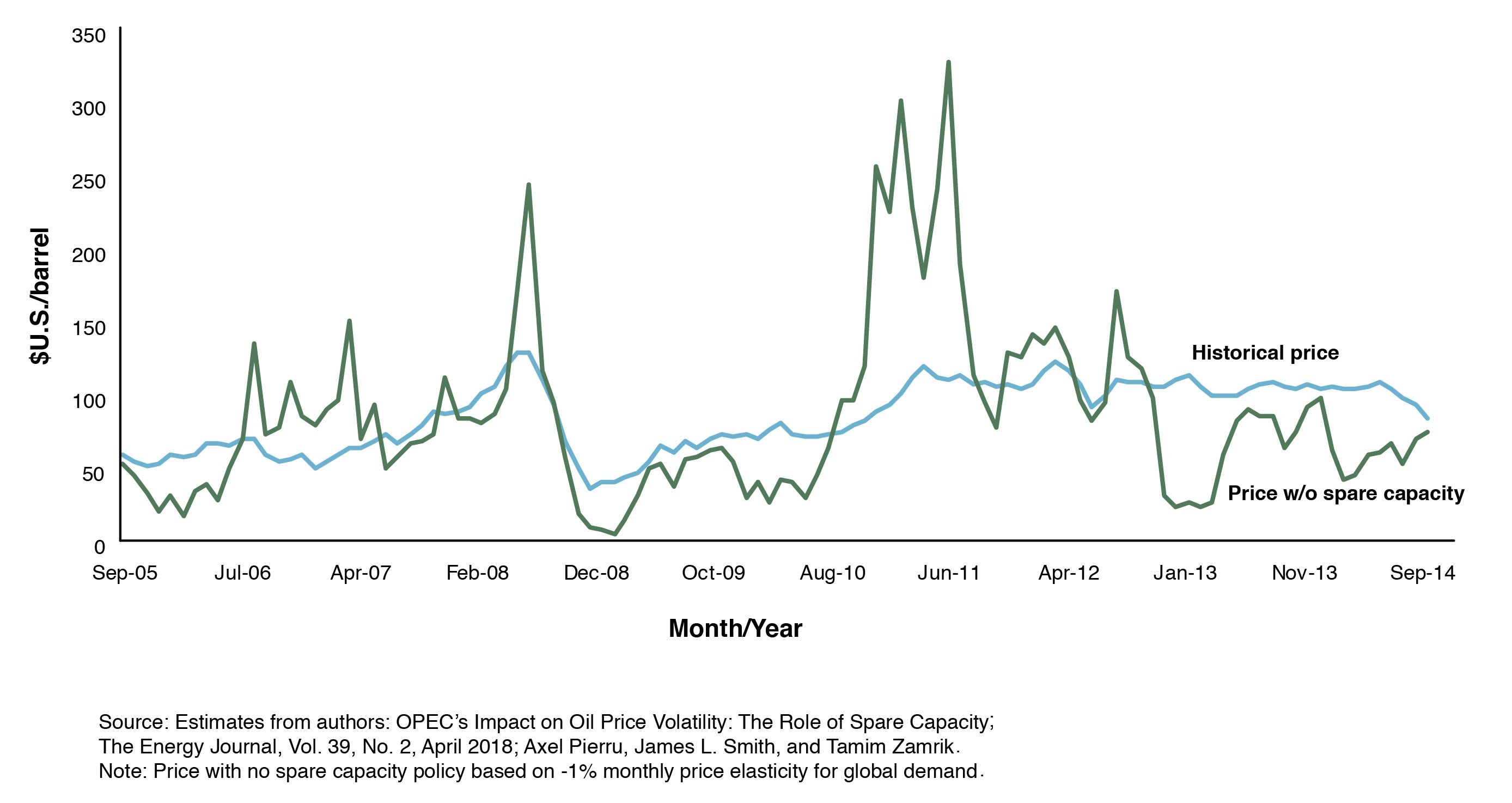 The study also examines the magnitude of spare capacity.  This is especially relevant given that the absolute level of spare capacity is now less than it was two decades ago, despite oil demand having grown by 25 percent.  To estimate the desired size of the buffer, the study attempts to consider all possible shocks and their respective likelihoods, and then compare the value of spare capacity to the cost of building it. The ‘right size’ is when the cost of adding a marginal barrel per day of capacity is equal to the GDP loss that would arise without that additional barrel of capacity. The analysis confirms that OPEC’s buffer, estimated at 2.64 million barrels per day (1.94 million barrels per day for Saudi Arabia), has been in line with global macroeconomic needs.

Spare capacity is only one piece of a much larger picture in terms of neutralizing the negative impact of oil shocks. By maintaining costly inventories, individual consumers, producers, government agencies, and multilateral organizations also shoulder part of the burden of dealing with oil price shocks. This has not been entirely altruistic because spare capacity has a value to the holders: production from the buffer is typically put on the market when prices are high.

The recent emergence of shale oil as the world’s marginal producer, with a development lead time measured in months, has made non-OPEC supply much more reactive to price. By contributing to market stability, shale oil is capturing a share of the historical value of spare capacity for the world economy and reducing the incentive for OPEC members to invest in maintaining the cushion. However, shale oil is also subject to potential logistical constraints, such as those currently limiting its expansion in West Texas. Furthermore, it does not suffice to rapidly offset unanticipated shocks of large magnitude. As such, it does not provide sufficient protection for the world economy and OPEC spare capacity still provides value in stabilizing oil markets.

This commentary is based on a KAPSARC research project initiated in late 2016, resulting in the April 2018 publication of the paper ‘OPEC’s Impact on Oil Price Volatility: The Role of Spare Capacity’ in the Energy Journal, Vol. 39, No. 2, 2018.

Imagine a world without OPEC